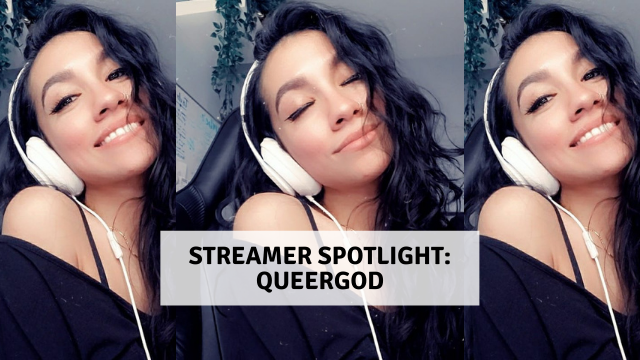 One of our newest entries in our growing list of series: Streamer Spotlight, an in-depth look into the best communities and best growing communities on Twitch.

Today we will be interviewing one of Okizeme's personal favorite streamer: Queergod (they/them)

Queergod, aka Zee, is a variety streamer on Twitch who is generally here for a good time, making connections, putting a smile on others faces, and supporting others as much as they can. In a little over a year, they have grown their communities and has recently hit 3k followers and aims to be partnered by the end of 2021!

What are people going to be a part of when joining their stream?

Anyone who joins the stream is going to be included in an incredibly supportive community. They may also find other LGBTQ+ individuals who are into gaming, and their community will actively engage throughout the stream. Zee's channel is very open on topics and they can talk about anything from gaming to heavy topics such as mental health and personal identity. Their community is also big on supporting small streamers, and they often encourage everyone around them to grow as well.

What games do they play?

Queergod is an avid Apex Legend Player, but also does more community oriented games like Among Us and Jackbox TV. But they do so much more like live Tarot readings and painting streams.

Why do they enjoy playing Apex?

One of the biggest highlights of their channels?

When Zee hit 500 followers, Queergod's partner @saintnieves and their community collaborated on a congratulatory video that by their definition Zee "ugly cried on stream for the first time". It was Zee's favorite moment as a streamer as it was a part of a long 12-hour stream. They felt the extreme love and thought they could be much more because of that.

Queergod's channel was also nominated for many awards in 2020!

What are their biggest strengths as a streamer?

Zee credits their strengths as a streamer to how involved they can be with their viewers and communities. There is always going to be someone who will lend a helping hand or good ear to those who come in!

They also feel blessed that they were able to stumble upon people who are more positive than not.

What are some advice you can give to those who want to stream?

People often feel like they have to be good at a game or craft they do to stream. You don't need to depend on your skills to grow a community because a lot of people in the twitch community who will just engage with them and make them feel a part of a community.

Don't allow people to tell you that you have to be good at a game just to stream it. Supporting others who support you will go a long way.

Don't take too long breaks in between your streams and finding consistency in your schedule.

Every streamer faces it... How do they deal with online hate?

The hate that comes by is generally bigoted. Zee is thankful for their mod and partner to help filter out issues when they come up and is very proactive on that end. They work really hard not to combat trolls, but treats them as an opportunity to educate an individual without being confrontational. HOWEVER, they are willing to stand up for themselves and bully those who are unwilling to be educated, learn, or nonconfrontational (Oki thumbs up).

What were some difficulties about streaming?

Zee is a fulltime graduate student and worker. Finding a good time and schedule to stream becomes an extremely tiring task by itself, but throwing on a higher education and fulltime work, they are the superhero who can do it all. Being LGBTQ+, it becomes a targeted attempt for "trolls" to come by and try to disrupt the stream and the vibe.

If you had a magic wand what would you change about the gaming community?

They would like to change how non-diverse the community, which is a cis-white male community. Games are barely getting better to include BIPOC and LGBTQ. We are on the path, but it's a slow process.

Who are some streamers/content creators that they look up to?

@ninjayla is a big inspiration for how Zee uses her channel, and looks up to her a lot. They personally love their energy and how very wholesome everything is when you step into Ninjayla's channel.

They are aiming to be partnered with Twitch. Within the year, Queergod is aiming to start a podcast with their partner called "Oh How Queer", and they aim to educate and give assistance to others whom are willing to learn more about their self-identity or others identities. They haven't found time yet, but they will also be looking toward opening their other channels back like Tiktok and other social media platforms.

Thank you all so much for checking this week's Streamer Spotlight, and please don't forget to check out Queergod's channel.