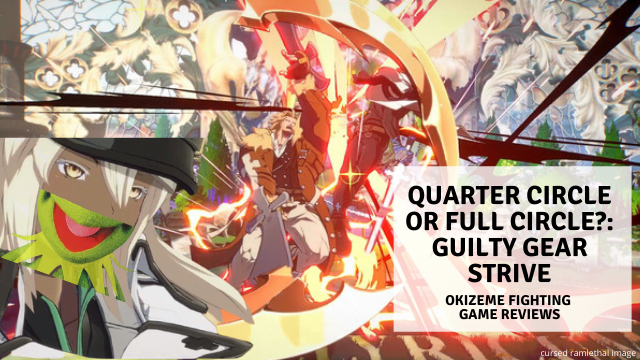 Today, we will be reviewing Guilty Gear -Strive-! The hottest fighting game to arrive with the diverse cast of Guilty Gear, a new style of gameplay for the GG series, and most importantly, rollback netcode. The Okizeme team was able to test out Guilty Gear -Strive- in its open beta, so we decided to throw our hat in the ring and give you all an unbiased look into Arc System Works upcoming release.

Welcome to Quarter Circle or Full Circle? : Okizeme Fighting Game Reviews! Our newest installation of extensive fighting game reviews where we will discuss what games are fun, comprehensive, and overall great games to play (full circle) and the ones that had potential, but missed the mark in certain ways (quarter circle).

Here are the 3 categories the Okizeme team will be using to rate fighting games-- scores will be totaled at the end of the article, as well as a comprehensive analysis of the game!

Visuals - We will be looking at character models, in-game animations, stages, etc.

Depth - How much depth does starting and mastering the game give you?

Guilty Gear -Strive- is a phenomenal game to look at. The visual aesthetic of the movement of characters and the background animations and designs are reminiscent of Marvel vs Capcom 2, King of Fighters '02/95/XIV. It adds a great sense of nostalgia just from the first 3 seconds of entering a match and seeing how the background enhances the characters on screen. All of the stage selections feel very diverse and have different elements that will feel pleasing to many players.

The character animations have well exceeded our expectations at Okizeme. With our experience in traditional fighters, we tend to be skewed that all 1-on-1 anime fighters tend to fall into the same animation style that Arcsys (Arc System Works) is known for. We were absolutely wrong. Strive has taken the strengths of previous Arcsys games and have improved them phenomenally into one perfect blend. The hit confirms feel impactful and every rendered particle adds to the effect that every hit matters in Guilty Gear -Strive-. The sound team has done a very good job accompanying SFX into the animations that make every hit feel like a full screen 2H. Some traditional anime fighters tend to have a hard time making the hits feel impactful, as if there was a sense of weight behind the characters. GG -Strive- has finally hit that mark. A punch to the face at the end of the day should feel like a punch to the face.

The character designs are also a well needed and deserved improvement of the Guilty Gear series. Every character has been given a great updated look, and newcomer Giovanna feels like a veteran because of the care in designing the character to fit Guilty Gear's visual elements.

We understand that the game is still in beta and the release is not set to mid-April, and that's plenty of times to fix issues since the main point of the open beta was to test rollback netcode and gameplay. However(!!!), this is the most important time to talk about the shortcomings of the game so they can be fixed by release.

As beautiful as the character designs are, they are not perfect. In the opening match animations and win screen animations, the characters mouths are the most distressing things to look at. They look like there mouths were designed to look like Kermit the Frog, and once I noticed it. I couldn't un-see it. I really wish to burn the memory of Kermit-mouth Ramlethal from my brain. All of the characters suffer from this problem and hopefully that was a beta issue and they are aware of this at Arcsys.

The online lobby is actually horrid. There's no sugarcoating it. I understand stylizing your art to fit visual themes and this isn't a knock on games that openly design their game to be 8-bit styles. But, the 8-bit ladder style online lobby is an extreme step-down from the previous versions of "open-world online lobbies" that Arcsys is known to produce (i.e. Dragon Ball Fighterz, Blazblue Cross Tag Battle, Granblue Fantasy Versus). Especially since the game is one of the most beautiful versus fighters to have ever graced the Fighting Game Community.

The most important factors to look at in terms of depth is how the game makes you feel from the first day into 1+ years from then. The depth of a game can be attributed to having a balanced skill floor with an infinite skill ceiling, and the closer the game can achieve that it will tend to have a greater longevity.

What does it mean to have a balanced skill floor?

Guilty Gear -Strive- is without a doubt the easiest Guilty Gear game in the series. There was a bias albeit well-deserved that Guilty Gear felt like a real "Adult" game to play. The gameplay was unforgiving to new players, and for anyone getting into Guilty gear in the past few years, they had to get better with the Guilty Gear purists who have been playing since release. The best way LordKnight puts it is simple, "not everything in Guilty Gear will get you a free combo." You can't hit confirm off of every hit and your frame advantage is dependent on character knowledge and frame data. In tandem with having harder combo conversions, the game is incredibly fast paced with decision makings coming down to pure muscle memory and frame data knowledge.

Guilty Gear has toned down it's gameplay system and has made combos easier and shorter to input, and has become an amalgamation of Samurai Shodown (2019) and Granblue Fantasy Versus. The things that make Guilty Gear a beloved franchise is still there without a doubt. Roman cancelling into combo extensions and now you can use them to get out of pressure situations (replacing dead angle), using Burst as a get-out-of-jail-free card. The game will definitely still reward the players who are willing to dedicate themselves to Guilty Gear -Strive-. As the game is still new, the skill ceiling for the game seems near infinite.

As of right now, we have found no issues!

Let's talk about the most important thing that Guilty Gear -Strive- has to offer: rollback netcode! If you are looking for an in-depth explanation of rollback netcode, please check out Ricky Pusch's, Explaining how fighting games use delay-based and rollback netcode.

For a simple summary, there are two main types of online play when designing fighting games: delay-based netcode and rollback netcode. The former is the most common and the most problematic, as the game will freeze when there is internet connection issues and the game will "delay" and wait until the internet connection fixes itself before it let's the game be played. To the players, it looks like the screen is freezing. Rollback netcode systematically remembers the players inputs even as the game is "freezing" but won't show it on the screen. The game instantly simulates and recreates the inputs on the screen. To the player, this would look like the characters are teleporting across the screen.

Rollback netcode is the superior option mainly due to the fact that games can be played across the world with relatively low ping. For example, a person in New York, US can connect with someone in Tokyo, Japan at a relatively low ping and play a match as if they were in the same room! However, Japanese games are not a big fan of rollback netcode since it is an American style coding option, and Japanese games tend to not care about overseas audience since it's more important to appeal to your own demographic first.

That's why it's more common for American-based games offer Rollback netcode--Killer Instinct, Skullgirls, Footsies, Fantasy Strike, Them's Fightin' Herds, and etc. The wheels are turning in the Japanese Fighting Game industry! Tekken rollback netcode is "3". Now, Guilty Gear -Strive- is thinking ahead for a global audience in the midst of a global pandemic and offering it's game to a worldwide stage. This is actually the most pivotal step in the future of fighting games and GG -Strive- has made leaps and bounds.

Traditional Fighters are absolutely oppressive being on the defensive end in the corner, and this has been a trend that has been going on for almost 3-4 decades! If you were on defense, and the opponent either put you into an Okizeme situation or put you into a blockstring. You were most likely going to die unless the other player messes up. In Street Fighter, if you were in the corner you would just blow up from throw mixups that did nearly half your health. Tekken getting hit in the corner usually net some insane wallbreak/wallsplat combo damage. Dragon Ball Fighterz you would get 50/50 mix ups until you got blown up into 60% minimum damage combo, if not a TOD. In UNICLR, you can hit get from full screen if your back is in the corner and get a full combo conversion from the other player.

All in all, being in the corner absolutely sucks and Guilty Gear definitely made no exception to that... UNTIL GUILTY GEAR -STRIVE-. Strive now offers a simple solution to a complicated problem. If you were to get hit into a combo you enter a wall splat state. It rewards the offensive player to get a free damage extension, but it will break the wall and send both characters flying across the screen to a second stage, where both players will be reset to neutral! Why is this a big deal? Now what was once a nightmare scenario becomes more beneficial to the losing player, but also maintaining a plus advantage for the offensive player. I absolutely love this concept.

I think one of the most outdated things a game could do is not have a good tutorial. Even in open beta, the tutorial should offer a more well rounded gameplay tutorial than pressing forward, backward, block, P, K. The game didn't really explain what Roman Cancelling was, Burst, Tension and other things that makes Guilty Gear unique. It also doesn't explain command normals, overdrives, proximity normals, and others of note until you get into training mode. There were combo mission modes in GGXRD R2 so for right now they will get a pass as I don't really see them removing that function when the game comes out.

Guilty Gear -Strive- hits nearly perfect marks scoring a 28/30 across all categories, making it a Full Circle game to the Okizeme team! This game feels really fun to play. Guilty Gear -Strive- lets new beginners take on an older game that has been given a well-deserved breath of fresh air. The gameplay visuals are absolutely stunning while playing, but may be lackluster outside of the matches. The gameplay itself puts this game above and beyond other games in its class with the rollback netcode online play and the more well balanced version of a 1-on-1 fightinig game. It actually feels horrid to go back to delay based netcode games, and the release date cannot come any sooner. This review was made for the Open Beta and we are all very excited to see the full product on June 11th, 2021!