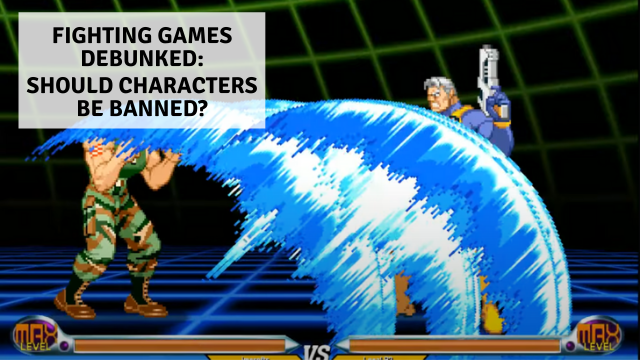 Should characters be banned in tournaments/competitive play?

The year is 2012; we just survived the supposed Mayan apocalypse, and you decide to head down to your locals and try to have fun in a small tournament and play some Super Smash Bros Brawl. You arrive with friends, and before you get to even sign up, your main character and backup character is banned. Metaknight and Snake are TOO top-tier for play and you cannot enter the tournament anymore.

Is it fair to exclude players from entering tournaments based on their character picks?

Is it fair to exclude characters because they are too strong?

What is banworthy in tournaments?

There have been thousands of organized tournaments since fighting games were first popularized in the early 90s, and each have a very specific clause on what is banned from tournament play. What are they?

The golden rule for banned play is:

A player cannot exploit glitches, hacks, bugs, or mods that stops the flow of play.

There may be other rules that fit the mold, but generally they act as guidelines that enable players and are not allowed, but not outright banned.

These certain instances may introduce game breaking glitches that we can see here, where the Ruby Heart player uses the infamous Ruby Heart glitch to completely freeze the arcade machine and you have to force reset the machine to play again.

Allowing players to use these exploits completely undermines the high level competitiveness of fighting game tournaments.

This also does not translate to the fact that Ruby Heart should be a banned character just because of one exploit. Ruby Heart is still playable at all level of tournaments.

There have been instances where tournament organizers have elevated beyond the golden rule and decided to outright ban characters, and this refers to the bans on Metaknight and Snake in Super Smash Bros Brawl.

If we were to compare the cast list to both banned characters, Metaknight and Snake outshined the rest of the cast and was considered a "god-tier" character, where the only suitable counter was another Metaknight or Snake.

So, to increase the retention of players and excitement of organized tournaments, many have opted to ban them.

What has this done for the community?

Im getting wobbled in my favorite game

What do i do

The list can go on and on. However, banning characters is actually a backwards way to deal with the issue, and now that we have crossed that line. The complaints will never end.

What happens when you ban a character

Banning a character may seem good on pen and paper, and the main arguments for banning god-tier characters are:

Thus as a community, you are opting to exclude individuals for enjoying the same things that you do. Everyone should be valued equally and be given the same opportunities as everyone else. That is the bottom line.

How can we redirect this energy?

Instead of banning characters, the community can reorganize itself to create different styles of play! For example, Justin "Marvelous" Wong has introduced a new guideline for organizing Marvel vs Capcom 2 team compositions. For those who may not know Marvel vs Capcom 2, this game is infamous for its "3 gods", which refer to Magneto, Storm, and Sentinel. Tournament play has consisted of at least 2 of these characters in every team comp, and top 8s would feature the same styled teams for a decade.

To combat this, Justin Wong has recently introduced this as the ratio rule where each character in Marvel vs Capcom 2 is given a numeric value.

This is how I feel if MVC2 Ratio tournament becomes a thing and the max points is 7 POINTS to create a team.

Argue with me plz pic.twitter.com/bUdrvcf8aR

A team comp is not to exceed a value of 7, so if you were to pick a god tier character, you must use two 1-point characters to complete your team. This has created a breath of fresh air in team composition designs for MvC2 and is a better workaround for the player base as it does not exclude any individuals from playing the game.

Another way to redirect this energy is to actually play the top-tier character yourself! You don't necessarily have to main the character yourself, but you should allow yourself to share in the excitement other people have playing a well-designed character. It is actually going to a positive-sum gain because not only do you get to share in experiences of other players, but also you get to fully understand the character and how they function in a match.

If you are able to understand the character then you will be able to apply that to your main character and strategize new and exciting ways to deal with the match up. This knowledge can be learned or shared with other players struggling to find the answers that you may have found. You are never alone in this willingness to get better at your favorite game.

Thank you so much for checking in this week and always check back in for a new post!