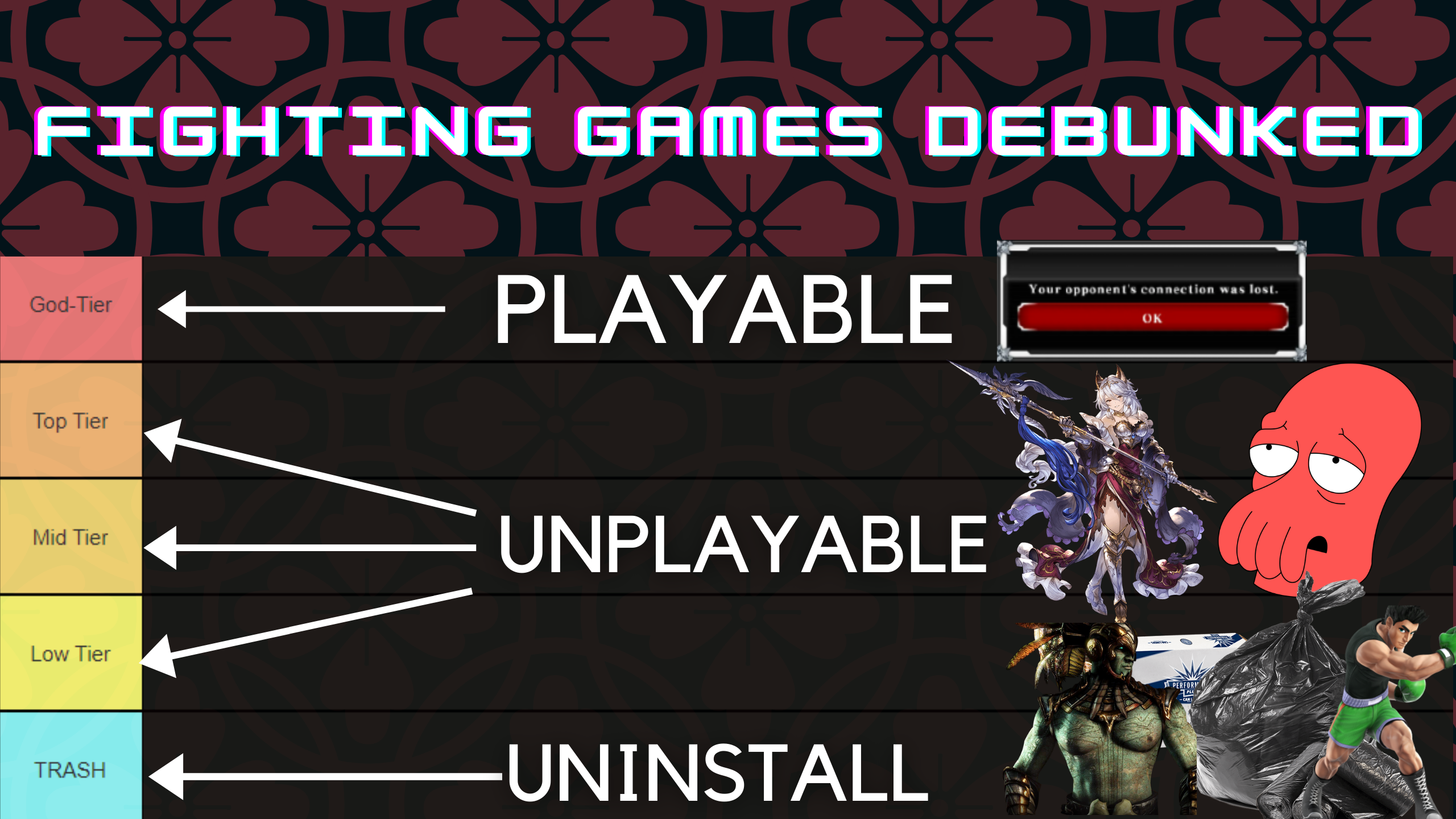 What character should you play?

Welcome back to this week's installment of our weekly series: Fighting Games Debunked! (if you missed any of our previous entries feel free to check them out here) In this series, we aim to deconstruct entry barriers for new players and improve the mindset of our veteran barriers by debunking myths and fallacies that tend to stonewall players from improving or joining the FGC. Today, we are going to be talking about one of the toughest issues both new and veteran players experience when playing a fighting game: picking a new character, testing the waters with new characters, and playing the character.

We get it. Fighting game characters sometimes makes absolutely zero sense and it's hard to pick a character you like. "Why would a giant freaking grizzly bear need to compete in the Iron Fist Tournament when there are literal gods and demons? Why is this doctor carrying a scalpel the size of Dwayne "The Rock" Johnson? Why aren't I allowed to escape from Crossing Fate?" The roster is seemingly so expansive and it may seem challenging to pick a character. The best advice for new players is to pick a character that visually looks good to you. You might be into a meme character and want to play characters that look hilarious on screen i.e. Faust, Merkava, Dan, Roger Jr., Servbot, Viewtiful Joe, etc.

"You can find the sample study here but we did the reading for you."

What would the skeptics say?

There is actually a very funny phenomenon that happens in a fighting game. It happens at least once when you are in the character select screen with another player who has been playing "x fighting game" for more than a day, and you want to try out a character. ON THE FIRST FRAME of hovering over a character to see their portrait, the other player reflexively says, "Don't pick that character they're low-tier/trash/too hard to play. You won't have fun." They can't help it. It's so ingrained in that player that fighting games are only fun when you're winning and a character is only fun to play if they can produce results. They can't fathom the idea that you can pick up a character because they look fun, and that losing can be fun too if you are looking to improve.

Don't get me wrong.

There are a lot of good, positive players in the community. It's the only reason that the FGC is so well-developed and community oriented. However, if you have been a player that has told someone not to pick a character because of a tier list, or you regurgitate what some pro players say about a character, you are a detrimental gatekeeper for new players. It's plain and simple.

Tier lists are a social construct.

One common fallacy that veteran players fall into is looking at a tier list that top players post and resorting to those tier lists as the bible for playing the game. Although they are a useful tool that affects the top 10% of the player base, the other 90% are actually less affected by a tier list the lower their ranking is. Tier lists are judged only by a theoretical maximum level of play.

Tier lists are a type of association fallacy. If you look at a tier list and you see that a character you wanted to try is listed as F-Tier, you probably wouldn't want to spend any effort on a character that is more likely to lose to other characters. This allows for a confirmation bias that the character has no value in playing because one person said so albeit the person may be the best player in the world. We hear it all the time, "oh, that character is mid-tier at best." It's a type of underhanded warning that your skill levels would only peak at mid-tier at best when playing that character.

The association fallacy works vice versa--if your character is listed as God-tier, it bottlenecks your view of expanding your roster outward and trying to pick up multiple characters.

Tier lists are good, but they are not really meant for you. They are a useful tool that affects top players that are dedicated into grinding the ladder or going to competitions. Tier lists are a spectrum of characters that help you determine a "competitive edge" over other players. These competitive edges do matter in the minority cases of competing in tournaments or playing in the top 1% of ranked matches. In the larger aspect of playing a game and having fun, tier lists offer no value in either of those categories.

We even see dozen of examples of low-tier characters making it to a global stage with top players.

A very popular one would be JMCrofts' How an innovative underdog took out one of the greatest players in Street Fighter history.

So, how good a character ranks on a tier list does not take into consideration a player's strengths and skillsets. They are only a good determinant of opinions when using to discuss or visualize competitive edges of specific characters vs all other characters. They are not used to determine the ability of a player to win, have fun, and grow.

Let's move forward in time and you have successfully selected a character you are interested in playing and you have just started the round. BUT WAIT, YOU HAVE NO IDEA HOW TO PLAY THIS CHARACTER.

That's okay, tell the other person you want to press start and look at the command list.

The command list is there to show you the different types of command normals, special moves, and super moves your character has. The only time you are not allowed to press pause generally is during a tournament and I have no expectations of this scenario happening during a tournament, so let the other person know at round start and press pause.

If you have social anxiety and it's difficult for you to speak up that's okay. Here are some tips to test your character in game! This may get term intensive so please check out our dictionary here if you are lost. We are looking over numpad notations, attacks, special moves, and super moves.

Those are the simple 4 quick questions you can ask yourself throughout the first game to see what kind of character you are playing. At the end of the day you can determine how to play your character at a very base level. If your character's normals are hitting very far, then you know to play a little bit further back and control the screen. If they are a close ranged, then walk up and press more buttons. If your characters 236 + ATK move is a projectile, you know you can zone with it and win by zoning. If your character does a move where they attack and move closer, you know you can do a simple rush down and pressure the opponent into defense more. That is all you really need to know. It does not take an expert's knowledge to determine if you like what the character is doing on the screen when you are pressing buttons.

Time to take it to training mode.

After you have found a character you like, you're interested in learning, and have finished playing with your friends, try taking the character to training mode! You are able to find numerous guides online through Youtube, Reddit, Discord, Okizeme.com, Twitter that will help you improve your game one step at a time.

I would always recommend looking up a "Beginner's guide to X fighting game" and then a character specific guide afterwards. One point of not that even in training mode, learning the character should come as a learning curve, but it also should feel rewarding and engaging to learn the character. Even if you spend time in training mode, you are not locked into playing just that one character. Feel free to repeat the process and pick the next character you like and want to try. There's no need to shackle yourself into playing one character.

This is a gentle reminder that at the end of the day, you are the only deciding factor that determines whether the character you picked is fun to play or not. Don't feel discouraged to play a character of what other people's opinions are. Tier lists are a social construct by one person that just visualizes their personal opinion.

When you want to pick up a new character feel free to pick the character you like and appeals to you. You are more likely to continue playing and have more fun while doing so. Keep testing the waters and always keep your mind open to new and exciting things.

Thank you so much for taking the time to read our article today. We will be publishing these essays on a weekly basis, so don’t forget to check back in for a new post!