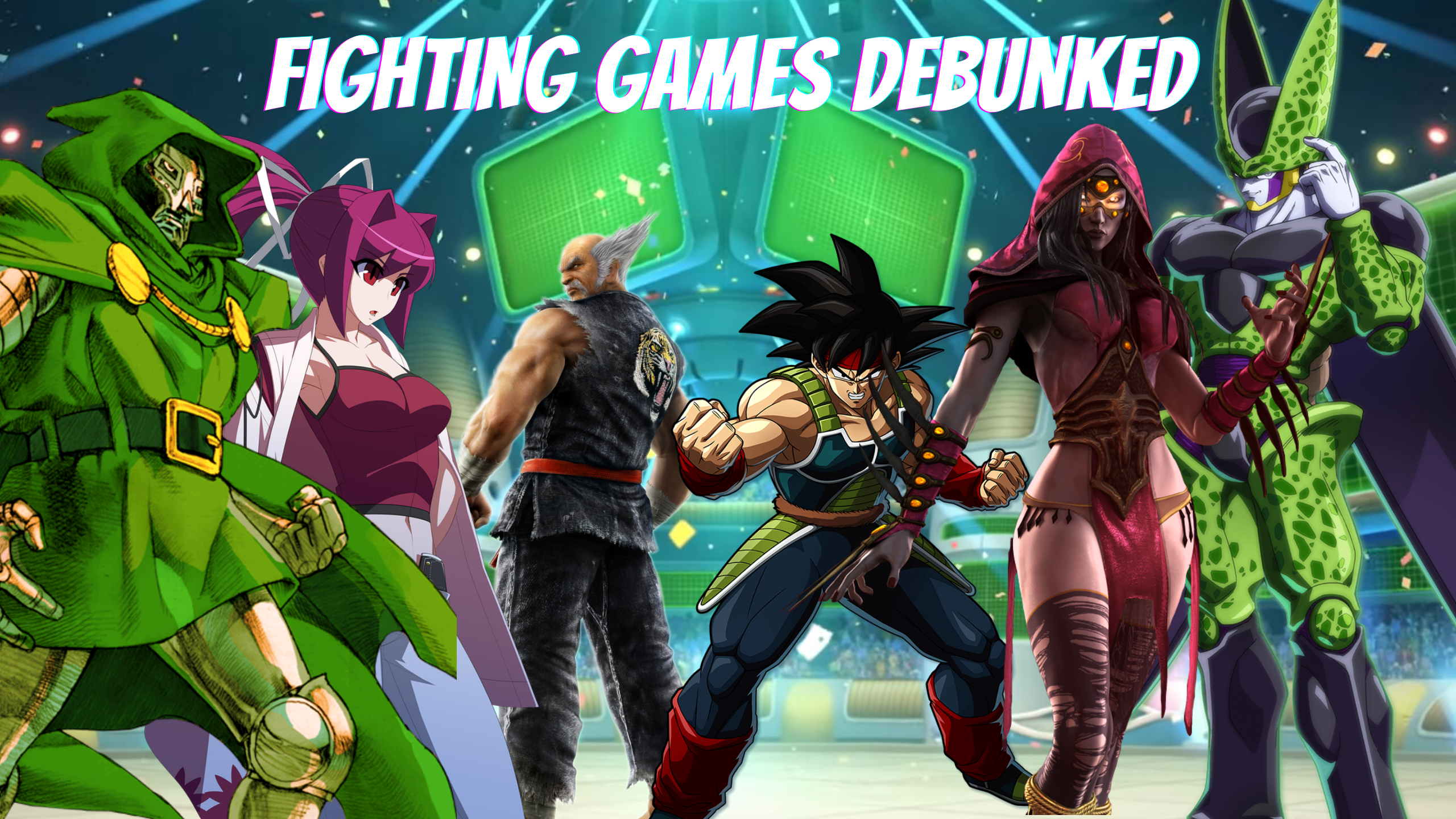 Welcome to Okizeme Gaming’s first entry in our newest essay series: Fighting Games Debunked. This series is dedicated to improving the retention of fighting game players, especially with newer players who have never played a fighting game in their life. We also encourage our veteran community to participate in the discussion and help encourage growth in the FGC by changing old, preconditioned mindsets. We aim to debunk myths, fallacies, and misconceptions that are involved with learning the art of fighting games. This entry will be taking a look at one crucial factor for any fighting game player looking to become a part of the FGC: playing a new game.

There are hundreds of fighting game titles released since the early generations of video games that span over several typographies like tag fighters, arena, 2D, 3D, weapons, platform fighters, etc. The list can seem virtually endless, and you may feel that you must meet certain criteria to be able to be “good” at a fighting game. You may also feel that you need a certain skill level and knowledge set before even getting into a fighting game. Maybe you weren’t able to get into a game during its peak popularity because of money issues or you were too slow to join the hype train. You might be abhorrent to the idea of being in a training mode for hours on end, just to lose online due to someone who’s been grinding since day one In summary, you might feel there is a tall wall gatekeeping you from wanting to learn a new game, so let’s debunk some of these myths.

Let’s get right into it. Fighting games come in all shapes and sizes and finding the right game may be difficult because there are so many subgenres to choose from. You may feel that you like the slower paced nature of Samurai Showdown or something fast paced like the Marvel vs Capcom series. Maybe you want to enjoy a simple fighter with simple buttons like Fantasy Strike or maybe you want early onset arthritis and play Undernight In-Birth Exe:Late[c-lr]. With so many different styles of gameplays with their own uniqueness that make them fun. Choosing a game might be difficult, but you are never limited to just try one game. Pick a game that looks visually appealing to you or maybe try a game that your friends will collectively play together.

Why are fighting games so difficult to play?

Learning to play a new fighting game may seem very difficult even for veteran players. Let's take a look at an example of an experienced fighting game player. As someone who has a lot of experience playing 2D anime fighters, you may have a difficult time playing a 3D fighter or platform fighter because there are elements in a 2D fighter that you are not necessarily trained to adapt to. This is usually because of muscle memory that inhibits your growth speed. One example would be an experienced Dragon Ball Fighterz or Granblue Fantasy: Versus player transitioning to Tekken 7 and/or Super Smash Bros. Ultimate.

The 2D Fighter plays the neutral game completely forward and characters can only move backwards, forwards, upwards, and downwards on the screen and characters will auto switch sides depending on where the opponent is facing.

However, in Tekken 7, 3D fighters have a different element of being able to move laterally into the foreground and background. Being able to move into the background and foreground adds a new layer to defensive, offensive, mix up, and okizeme options. For Super Smash Bros Ultimate, the main skill in neutral is being able to attack to the left or right side and being able to adapt in a more 360-degree environment than a 2D fighting game. Just on this one principle of how a character moves differently on the screen can create a different learning experience for any player, no matter how seasoned they are in the FGC or in a specific fighting game.

This also works vice-versa. Seasoned SSBU players or Tekken 7 players may have a difficult time understanding the exciting and fast-paced nature of Dragon Ball Fighterz. Neutral can be over in an instant with the push of a button, and the combo sequences are potentially more intricate and demanding than the prior games. These can be very difficult fundamentals to grasp because these games despite being the same category of video games have different approaches on how to even move your character on screen.

Don’t feel discouraged about getting into a new game. There are subtle nuances in each game that grants them their own unique identity. You may have strong skill sets because of the games you have come to love. Although these skills may not be transferable at first, once you understand the fundamental rules of a new game. Your skill sets slowly start to transition and adapt to a new level of play. The skill floor can be met because you already have experience understanding the basics of any fighting game. If you want to help yourself get better, treat the learning process as one simple mechanic at a time. As I would learn a new game, the first thing I’d like to understand is how to move my character across the screen, then I would learn what the attack buttons do, and finally understand the rules of the game.

For new players, understanding the “rules of fighting games” is the more difficult part of the process because a fighting game has different rules than say a MOBA, MMORPG, or Shooter will have. So if you are traditionally a MOBA player, learning brand new rules and mechanics will be a difficult part of the process but they are just as learnable as when you learned your first MOBA ever.

Fighting Games are generally played 1 player vs another 1 player and the requirement is to reduce the life (health bar, stock, etc.) of the opponent’s character(s) to 0. That is the one true rule of any fighting game. This in itself is the most difficult learning process of a new player because most non-fighting games involve player vs ai or team vs team.

Why is this a difficult concept?

The answer is quite simple. Generally, games will compensate for a player’s weakness by giving them additional strengths. In a MOBA, you may play League of Legends where 5 players take on another 5 players, and each specific player will have weaknesses covered by another player(s). An ADC in League of Legends is the main DPS of the team and will supply heavy damage over a period of time. ADCs seem great and every team should have 5 ADCs for maximum damage output. However, ADCs tend to have the lowest health bar scaling and defensive options, making them very susceptible to being killed easily without a proper team composition. That’s where the game will supply tank characters who deal with mixed damage, albeit at a substantially lower rate than an ADC, and will be able to stay in a fight and absorb damage for the ADC, allowing the ADC to survive longer in fights.

Tanks are so strong and they absorb so much damage, so we need to balance their weakness of not being able to move as much and deal as much damage quickly. Mages deal spell damage which breaks through the armor defenses of tanks and shreds their health bar just like an ADC should, but they are not very mobile units. Assassins deal heavy damage and can maneuver around the team easily to take out the ADC and Mages while avoiding tanks to shift the momentum of the fight positively for your team. In essence, if you are unable to cover for your own weakness(es) someone else probably will.

In RPGs, you do not play peer to peer but rather against the game AI, which can be exploitable and very easy to overcome. If you are not strong enough to fight the boss, go back to the open area and grind experience points to level up far enough to beat the boss.

In shooting games like CS:GO and Valorant, you cannot cover the entire map and secure A and B objectives simultaneously because obviously, you cannot be in two places at once. So, you and your team are split evenly among the map to cover places the enemy team could abuse as an advantage point.

Fighting Games are a different beast to new players. You may have to consistently train and learn different matchup experiences to be able to overcome your own individual weaknesses. At the end of the day, you have to rely on your own individual skill from the first block to the last hit; no one is going to cover your mistakes; and no one is there to bail you out of an unfavorable situation. You need to consistently consider the hundreds of variables the other player is going to do, and you have to pick the right answer consistently every single time.

Do I have to work so hard to become better at fighting games?

There is an entire community who is willing to always help and give advice when needed. The fighting game community is expansive on all social media platforms and you are going to find information about your game somewhere with guides and tips. It may be frustrating not being able to execute intricate combos or have immovable defense. As long as you’re having fun and making the most out of the game, you will improve.

Thank you so much for taking the time to read our article today. We will be publishing these essays on a weekly basis, so don’t forget to check back in for a new post!